Just so you know I’m singing the levellers beautiful day in my head – not the whole song just that line!

So at the beginning of September I had a new photo taken for my IDbadge at school, partly because the old one was wearing out and scratched but also because I was virtually irrecognisable in it – not so good for an ID badge! The new one came through but I’ve been leaving it at school so that I wouldn’t forget it. Yesterday (and today actually) it was under scarf so I forgot to take it off and it came home. This meant I could do a comparison with my old badge. I couldn’t quite believe it and I sent it to E saying ‘spot the difference’ 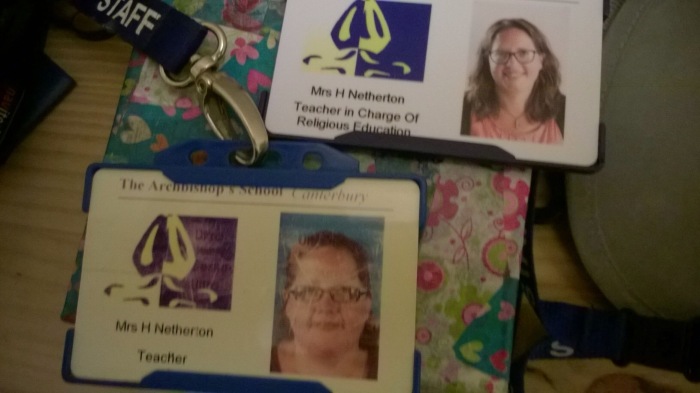 The response I got from E was ‘you even look happier’! Now, I am generally a lot happier, but I seem to recall that when the original photo was taken I was having a ‘bad day’, but I don’t really have bad days anymore. Yes, I have days when things are a bit tough, and thugs get on top of me, but I don’t seem to have ‘bad days’! I am a lot happier, and seem to be able to clamber through the rubbish – I wouldn’t say I hurdle over it but clambering through seems to be appropriate.

We are coming close to half term, and judging by what Facebook has told me, quite frequently around this time I have had trouble with my brain and have had seizures. But, as much as I’m ready for half term, I would not say that I am exhausted and desperate for it. I don’t feel like my body is going to give up on me once we get to Saturday because that is what quite often happens with teachers, but I am going to enjoy the break.

This half term has been mad, I’ve been doing a lot more at school, which means that I feel ‘on top of it’! I’m more involved in church, which has been a blessing and is fantastic! I’m still running regularly – about 5k 3 times a week. And every Tuesday I’ve been out of the house from 6:30-21:30 as I’ve been doing this vocations explore more course. I should be exhausted, but I’m not, I’m more energised and excited.

Tonight was my last explore more evening, and it was great. Before I started the process I was really apprehensive as I had no idea where I was heading or what was in store. And the first few weeks led to confusion, complete and utter confusion. But since the revelation of my vocation – at this time – everything has just been clarified, and the other evenings have been confirmation of what I am supposed to be doing, and what path that may take.

I started back at school in September having a major anxiety attack, I’ve ended my first half term, up to date, with plans for the next part of the year, confident that I am where I am supposed to be, doing what I am supposed to be doing and excited about what lies ahead. I am no longer in limbo. I still have no idea where exactly I am heading, and I know it’s not going to be smooth running, but this journey has got me to a place where most days I am thinking ‘what a beautiful day hey hey, what a beautiful day’