It’s Christmas Eve, this year I haven’t done any of the things I would normally do to make Christmas, Christmas. I haven’t seen THE advert, I haven’t watched a muppet Christmas carol (yet), I haven’t been to any Christmassy services, and yet… this year, more than any other, I am acutely aware of what Christmas is all about. The hope of life that was given in the most unusual and most unlikely of situations. God, becoming man, completely helpless as a baby and reliant on others to then become a saviour! Who would have thought, that so much hope would be in that one situation? Why this year? Let me tell you a story…

At the end of November the phrases ‘speck and plank’ and ‘pot calling kettle black’ could very easily have been quoted at me. One Saturday I was having a Diet Coke with E, I had just given a talk at a prayer breakfast about burdens. The pressures that Burdens put on us, and how they are unavoidable, but suggestions of how we can ‘cope’ with them. When I told E the topic of my talk she openly laughed in my face… and said something along the lines of.. ‘seriously, YOU were giving advice on THAT’? This was all done in love (I think) and I’m not hugely surprised by the reaction, after all she’d been getting texts from me about how I was struggling with everything. The following Tuesday was sixth form parents evening, where I spent the evening telling the pupils, that they just needed to ask if they were unsure. It was a difficult leap to Alevel work, but it wasn’t a sign of weakness if they didn’t get it, they possibly just need to look at it in a different way. I imagine if E had been sitting behind me, she would have been laughing constantly. With both of these occasions they were words I was happy to explain to others, but not necessarily happy to hear for myself.

I had reached breaking point, and I was broken. I cannot remember the last time so many tears have been shed by me. I cannot remember the last time I felt so helpless, worthless, and hopeless. I was not in control, my body had taken over. This was partly in a good way, in that I was being forced to rest as my body wouldn’t allow me to do anything else. But unfortunately in a bad way as well. In times of high anxiety (at times this was multiple times a day) I startled to scratch, not being aware of what I was doing, and ended up with horrific marks all over my face.

It has been a dark month, where the simplest of things would set me off. About two weeks ago I was getting my advent calendar, for some reason I took it off the shelf to get the chocolate. The tears started… behind the calendar was this picture 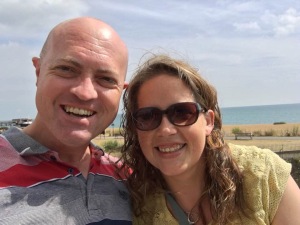 How did this make me cry? I love this picture, and when I posted it on Facebook everyone else seemed to love it as well. I seem so happy, so carefree, and yet when I saw this photo I just couldn’t work out how I would ever get back to that state again. After all currently I was like this, and this wasn’t even the worst

I was in a mess and I felt like I was in the dark and yet… throughout it all, when I was completely helpless and hopeless I was surrounded by glimmers of hope. Just by meeting with the doctor I realised that I wasn’t a failure, that this wasn’t ideal but it was acceptable. For once I have actually listened to my own advice… when the husband has struggled with anxiety in the past I have stressed to him the importance of going out each day, even if just for a short walk. That is what I have done, I have got out of the house and I have met up with people every day, and it has saved me. I have been truly amazed by the amount of love and support that I have been shown.

One friend, at the beginning, pointed out to me that I was in the best physical shape to overcome this, and I think that is true. Let’s face it, if this happened two years ago, I would have curled up on the sofa and hibernated, probably whilst having numerous seizures as well. Miraculously, there have been no seizures at all, and although there has been hibernation to a certain degree, that definitely hasn’t been the focus

Those words spoken by friend have kept me going, on days when I have just wanted to curl up, and give up they have given me the hope that I could make it through.

I’ve had many conversations with many people about what’s going on in my head, a huge amount of sympathy has been shown, advice given, and I am eternally grateful for my friends kids who have given me great distraction at times. The husband has been a literal tower of strength (the majority of the time), and I have honestly been amazed at how safe I feel when he is around. He allows me to talk when I need to, and he listens. But I think most importantly he allows me to just be.

Then there have been the friends who have been stern with me. They have given me the strength to make movement. The colleague who made me go the doctor. One gave me gloves, to try and stop the scratching, as well as giving me practical advice in terms of the situation. The mother in law who, when I said I was trying to keep busy and distracted pointed out that I needed to be ok on my own as well, to be able to cope with my thoughts. The mother who, although 200 miles away, has been a tower of strength, listening to the tears down the phone, probably feeling completely helpless, but still challenging me about what the next steps were.

Then E, who has done everything in her power to not let me get further into the hole I was in. She hasn’t pulled me out, but she has gently encouraged me and empowered me to make tiny steps, sometimes minuscule, but steps all the same. As well as telling me off when necessary. Especially the point when I said, “it would have been easier if I hadn’t made any of the changes over the last two years, that’s why I’m in this situations now” to which I got the response “Absolutely not but do you really want to go back to the over weight H that had seizures all the time. Change is painful and challenging but in your case has been for the better- I am sad that you can’t see that but I know you don’t want to go back”.

Stress and anxiety does weird things to your mindset, it makes you think things that go against rationality and reasoning. Luckily I have friends and family who are brave enough to tell me!

I like to be in control, and that is what I’ve struggled with the most, not being in control. Yet, it has almost been necessary. Those of you who regularly read my blog will know I’m a rather reflective person. This has meant that I have been able to explain exactly what is causing the stress and anxiety, the problem has been how to deal with that, there was no solution, which caused more anxiety. It has taken, what feels like forever, but has only actually been a few weeks to realise that I can’t change the situation, but the one thing I can change is me and my approach. I guess I’m just at a point where I feel I’ve made so many changes and I felt like I was the one that was always having to change. Which is what led to the above message from E. However, I am now receiving professional help to talk through what is going on and to put mechanisms in place.

Progress is being made, this week I have felt like ‘me’ everyday, which if I’m completely honest is probably the most in quite a long time. I have smiled and laughed, my face is clearing up. I have been for a run,  the first in 4 weeks, and a second run as well. As I have said to many of my friends, I feel like I have started to turn a corner. I know that it is going to be a long corner, there is a very good chance it won’t be easy and I have absolutely no idea where it is going to lead, but the movement is taking place.

One thing I have been doing whilst watching box sets has been cross stitch. This is something I enjoy anyway, but it has also kept my hands busy, and I have been living by the mantra “sew don’t scratch”! The pattern I am working on at the moment is for church, and is an A-Z of God – it sounds cheesy but is actually quite nice. It also brings a sense of achievement as it is essentially a mini cross stitch for each letter of the alphabet. This week I have completed A and E. Representing Alpha and omega, and Everlasting Father. The reminder needed that throughout all the changes I have made and continue to make, there is a constant in my life. That baby, born in a manger… the most unlikely of situations where you would expect to find a hope for the world.

This situation has been rubbish, but so often it is out of those rubbish and damaging situations that we grow and develop. I can’t see how at the moment, but I know I will.

Have a blessed and peaceful, Christmas. May you know God’s love and peace at this special time of celebration.

On a final note… although I’ve stayed very quiet on Facebook recently I have still been looking, and did a couple of those name analysing tests, and these were the results – quite appropriate I feel

One thought on “Glimmers of hope”